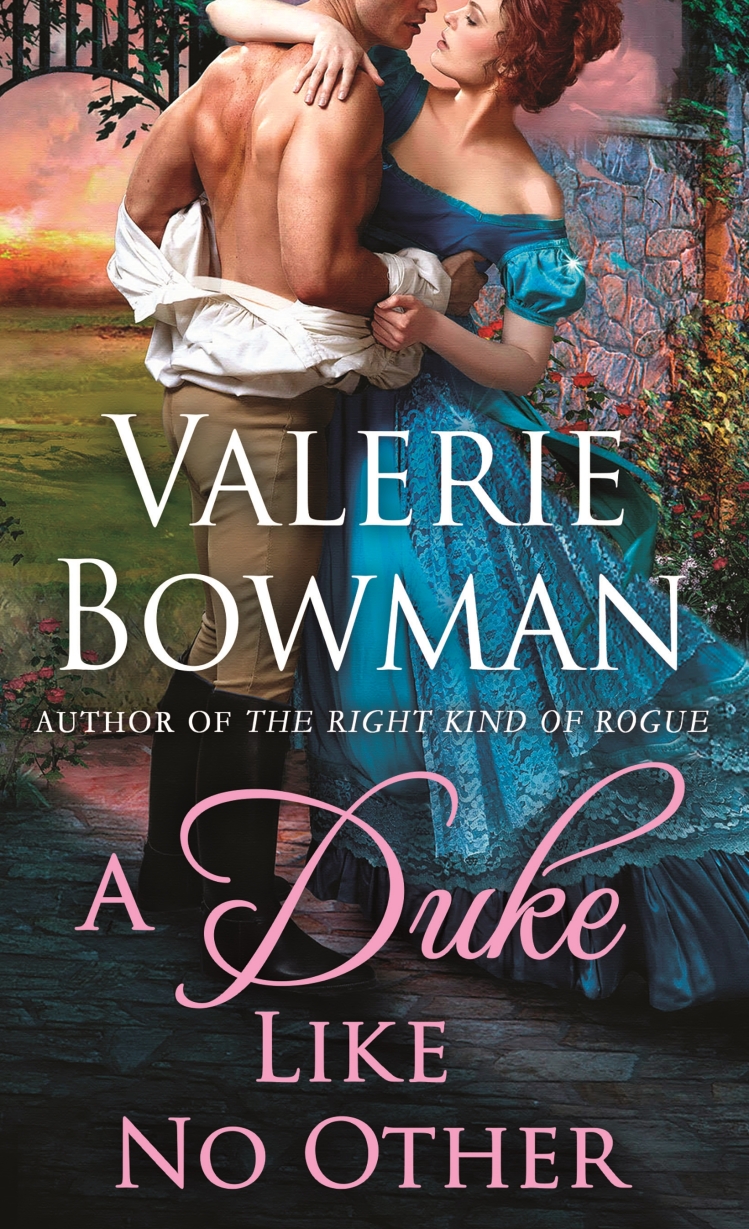 First comes love, then comes marriage. Unless it’s the other way around. . .

General Mark Grimaldi has sacrificed everything for his military career, working his way through the ranks without the benefit of a nobleman’s title. Now, his years of dedication are about to pay off—with an offer for a prestigious promotion to Home Secretary. There’s only one condition: Mark must be married. Aside from the small matter of not actually wanting to be wed, Mark faces another troubling problem: he already has a wife.

Nicole Huntington Grimaldi has spent ten contented years in France without her husband—and without regret. When Mark asks her to return to London and play the part of his beloved wife, she sees her chance. But neither of them is prepared for news that will throw Mark’s future into chaos…nor the undeniable desire they’ve rekindled. Maybe happily-ever-after can happen the second time around in A Duke Like No Other, the next Regency romance from Valerie Bowman.

For a chance to win a Mass Market Paperback copy of A Duke Like No Other, simply send an email to FlippinPages4U@gmail.com by midnight (EST) May 7, 2018 with Duke Like No Other Giveaway in the subject line – One lucky winner will be chosen at random on May 8, 2018. The winner will be contacted via email and the winner’s name (First Name Last Initial) posted on our Facebook Page and Twitter! This giveaway is only open to US Residents.

Copyright © 2018 by Valerie Bowman in A Duke Like No Other and reprinted by permission of St. Martin’s Paperbacks.

VALERIE BOWMAN grew up in Illinois with six sisters (she’s number seven) and a huge supply of historical romance novels. After a cold and snowy stint earning a degree in English with a minor in history at Smith College, she moved to Florida the first chance she got. Valerie now lives in Jacksonville with her family including her mini-schnauzer, Huckleberry. When she’s not writing, she keeps busy reading, traveling, or vacillating between watching crazy reality TV and PBS. She is the author of the Secret Brides and Playful Brides series.
Social Links:
Author Website
Twitter: @Valeriegbowman
Facebook @ValerieBowmanAuthor
Pinterest

A Duke Like No Other by Valerie Bowman
Tracy’s rating: 4 of 5 stars

I really enjoyed this installment of the Playful Brides series.

General Mark Grimaldi wants nothing more than to be Home Secretary and it appears that he is a shoe in for the position, but there might be a snag – Lord Tottenham, the man making the decision wants a family man for the position. Good thing Mark has a wife – he just needs to go to France and convince her to come back to England and play at being his loving wife until he gets his promotion.

Lady Nicole Grimaldi has been in France for the last ten years, ever since her marriage fell apart. Now Mark is here asking her to return and help him. She will, but she wants something in return – a baby.

They come to an agreement and return to England. But the first night back, Mark is summoned to his uncle’s home. His uncle is the Duke of Colchester, a connection that Mark keeps hidden, a connection that ruined his marriage. He and Nicole arrive and learn that John, the Marquess of Coleford, the duke’s son is dead and Mark is the new heir. Mark refuses to accept this – he says he will renounce the title, but he agrees to look into John’s death.

He soon learns that John was murdered and with the help of Daffin Oakleaf, Bow Street Runner (and former colleague of Nicole’s) he sets out to find the murderer. They form a plan and set out for the duke’s country estate. While they are there, Nicole and Mark finally get to work on her condition.

Mark and Oakleaf interview the suspects and narrow down the list down to a couple of names, but it is Nicole and his cousin Lady Regina who break the case!

Nicole and Mark have gotten along and she is falling in love again, but they never address the past and when she overhears Mark speaking to his uncle, she knows she will have to leave.

This is a fast paced story, it is not perfect, but it is very entertaining. If you love reunited / second chance romance stories and are willing to overlook historical errors – this is the book for you. The author utilizes flashbacks to give the reader the backstory of Mark and Nicole, but they are very well done and blend seamlessly into the story, much to my surprise and delight (I am not a flashback fan), the love scenes are steamy, the mystery is good, the secondary characters are wonderful and the ending is sigh worthy.

This is the ninth book in the series, but it can easily be read as a standalone title. I would happily recommend this book, but if you are stickler for accuracy, you might have some issues with this book.

One thought on “A Duke Like No Other by Valerie Bowman #BlogTour & Giveaway!!”