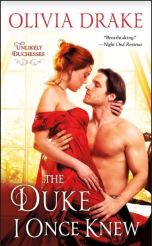 First love is always the sweetest…
For years, Abigail Linton devoted herself to caring for her parents and her siblings’ children.  Now, eager to create a life of her own, Abby seizes upon a position as a governess on a neighboring estate. Unfortunately, her absentee employer is Maxwell Bryce, the Duke of Rothwell, the notorious rake who once broke her youthful heart. But since he hasn’t set foot on his estate for fifteen years, Abby assumes she’ll never have to lay eyes on him ever again.

Then, from out of nowhere, Max appears. He is stunned to come face to face with the girl
next door he fell for years ago—before he went away, and she stopped writing to him …
even though Abby swears that he is the one who left her without a word. Could it be that
this spirited, witty spinster has won Max’s heart all over again—and that they may have a second chance at love?

I enjoyed this well-written book. It is a lovely second-chances love story with flawed but likable main characters and a ‘perfidious peahen’ of a villain. Overall, I loved the story, but I did think that some of the middle section could have been pared down and that space reallocated to flesh out the end because I thought the end was a little abrupt.

Abigail (Abby) Jane Linton is just weeks away from her thirtieth birthday. This upcoming birthday has her considering her life – she is unmarried, has no prospects and is at the beck and call of all of her much older siblings and their families. At this very moment, they are all around her loudly discussing her future – which of them she should live with, what she can do for them, which of them needs her services the most. Not one of them has asked her where she wants to live or what she wants to do. This will be her future – going from one home to the other being the unpaid companion, caregiver, nursemaid – whatever. Now, she loves her family unconditionally – and they love her, but she just has to have at least one adventure in her life. So, amidst all of the family arguments, she interrupts and announces that she is going to apply for the open governess position at Rothwell Court.

Rothwell Court is the property of Maxwell Bryce, the Duke of Rothwell, although he hasn’t lived there for fifteen years. He’s actually only visited there once, very, very briefly in those fifteen years. However, it is the home of the duke’s much younger sister – Gwendolyn (Gwen). Gwen has spent most of her life living at Rothwell Court with only the company of her governess, an old aunt who pays little attention to her and the servants.

Maxwell (Max) Bryce’s father whisked Max and his newborn sister away from Rothwell Court when his wife died. Max was sixteen and he was in love with the girl from the neighboring estate – Abby, who was fifteen. They had a tiff on the day of his mother’s funeral and they never saw or spoke to each other again for fifteen years. Each had promised to write and Max had told Abby that he would come back and marry her when he reached his majority. Each kept their promise about writing letters, but neither received any letters, so each thought the other to be faithless. Max’s father preached at Max constantly about not falling in love because love only made a man weak and brought him nothing but pain and heartache. Max took that advice to heart and became one of the biggest rakes in London.

When Max unexpectedly visits Rothwell Court and finds Abby there – sparks fly – and not necessarily the good kind. Max has brought several friends from London and one of them is the woman he wants to become his mistress. Abby can’t believe it and constantly takes him to task about exposing Gwen to that woman. Max and Abby still feel that strong attraction that was there when they were 15 and 16, but both fight those feelings – especially Abby because she doesn’t want any part of the debauched man Max had become. So, I loved watching the two of them grow and come back to the sweet love they once had for each other. I did think it took a bit too long to get there, but when it happened, it was lovely.

I recommend this book and hope that you will enjoy it as much as I did. 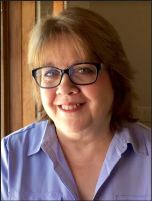 Olivia Drake is the author of the Cinderella Sisterhood series (Seducing the Heiress, Never
Trust a Rogue, Scandal of the Year, If the Slipper Fits, Stroke of Midnight, Abducted by the
Prince, Bella and the Beast, His Wicked Wish, and The Scandalous Flirt). She has been a
member of Romance Writers of America since 1981, and her novels have won the Golden
Heart Award, Best Historical Romantic Suspense and Best Regency Historical from Romantic
Times. She has also won the prestigious RITA award. She currently resides in Houston, TX.