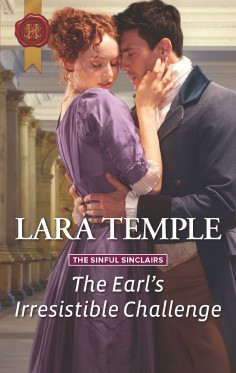 Could this infamous rake finally have found his countess?
Part of The Sinful Sinclairs.
When Lucas, Lord Sinclair, receives a mysterious summons from a Miss Olivia Silverdale he’s skeptical about whether he can help her. But Olivia, although eccentric, is in earnest about her quest to restore her late godfather’s reputation. Lucas’s curiosity is piqued, and not just by Olivia’s intelligent eyes and lithe form. A new challenge quickly presents itself: keeping Miss Silverdale at arm’s length!
Purchase Link

Lara Temple writes strong, sexy regency romances about complex individuals who give no quarter but do so with plenty of passion. After moving around the world for her career as a financial analyst and business consultant she returned to her childhood love of making up stories, and was surprised to discover that other people don’t mind reading them.

She lives with her husband and two children who are very good about her taking over the kitchen table for her writing (so she can look out over the garden and dream while Oscar the dog keeps her feet warm by sitting on them as she works).

The Earl’s Irresistible Challenge (out December 2018) is the first in her Sinful Sinclair series. In May 2019 Unlaced by the Highland Duke, part of a four book series with three other Harlequin Mills & Boon authors will be released.

Win 5 x e-copies of The Earl’s Irresistible Challenge (Open INT)
*Terms and Conditions –Worldwide entries welcome. Please enter using the Rafflecopter box below. The winner will be selected at random via Rafflecopter from all valid entries and will be notified by Twitter and/or email. If no response is received within 7 days then Rachel’s Random Resources reserves the right to select an alternative winner. Open to all entrants aged 18 or over. Any personal data given as part of the competition entry is used for this purpose only and will not be shared with third parties, with the exception of the winners’ information. This will passed to the giveaway organizer and used only for fulfilment of the prize, after which time Rachel’s Random Resources will delete the data. I am not responsible for dispatch or delivery of the prize.
a Rafflecopter giveaway
https://widget-prime.rafflecopter.com/launch.js
OR if you don’t like html or are on WordPress
http://www.rafflecopter.com/rafl/display/33c69494182/ 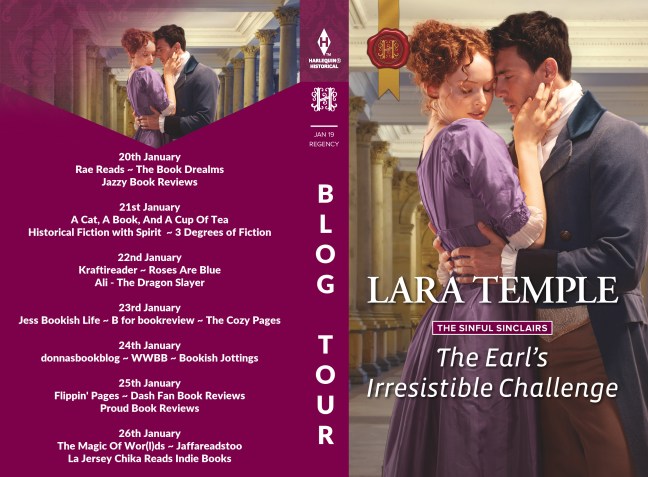 Olivia Silverdale is in London, not to catch a husband as her chaperon thinks, but to solve a mystery. She is convinced her guardian’s death is not as it appears and that his name has been smeared and while researching she has uncovered information that may clear the name of another man that was unjustly vilified, Howard Sinclair. She hopes by contacting his family, she will not only help them, but will learn new information about Henry’s death. She summons (there really is no other word for it) Lucas, the Earl of Sinclair to meet her in a dark church and in hindsight wonders if that was the best choice. Olivia tells Lucas what she needs and he is dismissive. She didn’t expect him to be so annoying or to not believe her, he actually accuses her of trying to trap him! He tells her he will think about what she has said and let her know what he decides.

Two days pass before he contacts her, he meets her at another church and tells her he will not help her and furthermore, he forbids her to investigate anything relating to his father. She tells him, she will do what she likes and leaves in a huff. Lucas should be glad to be done with her, but he is strangely drawn to her. She isn’t telling him everything and he convinces himself that is why he changes his mind.

What follows is a wonderful story of two flawed people falling in love, uncovering secrets and making peace with the past.

This was a well written, delightful story with very likable characters, amusing banter, warmish love scenes, secrets, betrayal, misunderstandings and finally a sigh worthy ending. There were a couple of things that felt important but were never explained, like her brother Jack and there were a couple of incorrect formal address issues – but nothing that detracted from the story.