After witnessing how love embittered his uncle and broke his father, Felix Havers, Earl of Ware vows never to love. He conceals his emotions behind a wall of wit and charm and is celebrated as the master of entertainments—parties, picnics, races. When his best friend’s wallflower sister needs to find a husband, he promises to make her the toast of London… without losing his heart.

Miss Sarah Colton has given up on the pursuit of marriage. When her parents learn she intends to open a millinery shop, they give her an ultimatum: choose a husband or they’ll do it for her. She accepts Felix’s help, never imagining their scheme will ignite a mutual attraction neither of them dares indulge. But when tragedy strikes, can they heal each other or will the demons of Felix’s past consume them both?

“It’s time for you to marry,” Father said, surprising no one. Or so Sarah assumed. Anthony knew how desperately they wanted her to marry, and she had to think Felix did too. Of course he did. Sarah was the first person to complain about the pressure they applied.

“Past time, one might say,” Sarah murmured and tried not to send an exasperated look toward her mother.

“There’s no need to be saucy,” Mother said tartly.

“Why must Felix and I be privy to Sarah’s humiliation?” Anthony asked.

Humiliation? Sarah had been annoyed, mildly embarrassed even, but not humiliated. At least not until now. She tossed a withering stare at her brother. He had the grace to wince and look away.

“There is a reason,” Mother said before inclining her head toward Sarah’s father.

Father coughed. “Er, yes. We wondered if it might make sense for you, Felix, to wed Sarah.”

Humiliation didn’t begin to describe the emotion swirling inside Sarah and erupting in her cheeks. Surely they were about to catch fire.

She would have snapped at her father or mother or both, but words simply wouldn’t come.

Anthony stood. “You can’t ambush Felix like that!” At Sarah’s intake of breath, he added, “Or Sarah.”

Their mother pursed her lips at Anthony. “We’re not ambushing him. Felix is like family. He’s well aware of Sarah’s sad state.”

Oh, this was just getting better and better. Now she was in a sad state?

“Furthermore, Felix is in need of a wife. Your father and I discussed it, and we think this is an excellent match.”

Sarah couldn’t bear to meet Felix’s gaze, so she stared at the floor. Had the patterned carpet always had that odd mushroom shape next to the leg of the settee?

“I’m glad you discussed it,” Anthony said with a great deal of sarcasm. “You might have discussed it with Felix, however.” He looked toward Felix. “Did they?”

Now Sarah chanced a look at him. Felix shook his head. To his credit, he didn’t look surprised or annoyed or pale or anything other than what he’d appeared since she’d arrived: uncomfortable.

The final book in the Untouchables series presents us with the much-anticipated story of Felix and Sarah. Felix is the best friend of Sarah’s brother Anthony and they have all known each other their whole lives. The story is well-written and stays on-point, but is, well, just a bit on the lackluster side. As I read, I kept expecting something to happen, but it never did. What we have is a straight-forward, friends-to-lovers story with little angst, no danger, no villain and no real excitement. This is a lovely story, but I think it could have benefitted from a prologue depicting Felix’s childhood and the things his father did because I think I learned those things far too late in the book.

Felix Havers, Earl of Ware, Duke of Distraction, has arranged a series of races over the last couple of books and they are featured in this book as well. They are fun and competitive and I enjoyed the competition and the participants.

Miss Sarah Colton’s parents think it is time she is married and they are tired of her single status. Her mother declares that she will marry and soon! Then, of all things, to Sarah’s great humiliation, they ask Felix if he’d marry her. Both Felix and Sarah are aghast and both immediately shout “NO”. Sarah has nothing against marriage, it is just that IF she marries, she wants to marry for love. In the meantime, she is making plans for her future as a spinster. She wants to open a millinery shop and she has all of the plans in place – she has the manager lined up (so she isn’t associated with trade) and she has almost enough money. Betting on the winners in Felix’s races have definitely contributed to her funds – all she needs is a location.

When Sarah’s parents ask Felix to marry Sarah, he can’t believe it. Everyone knows he will NEVER, EVER marry under any circumstances. However, he does volunteer to help Sarah find someone she can love and marry. He sets out with single-minded focus and assures that she meets a number of eligible and appropriate bachelors. Then, when they cancel the races in town, he decides to move the races to the estate of the Marquess of Northam – they’ll make it into a two- or three-day event and Felix will invite even more eligible bachelors. All goes as planned until there is a snafu in a kissing game Felix planned. Sarah is supposed to end up kissing Viscount Blakesley, but a mix-up occurs and she ends up kissing Felix. Sparks fly and fireworks explode for both of them. Then, when they discover who they kissed, they are appalled, dismayed, shocked – and they both decide that they’ll just forget that it happened. Right! We all know how that will go.

Then, the unthinkable happens and it throws both Sarah and Anthony into the deepest depths of despair. Their parents were murdered on their way to Oaklands, their country estate. They were going there to oversee some repairs that Anthony was supposed to have handled but postponed for a few days. Anthony blames himself and takes to drinking – all day every day. Felix visits every day and tries to help, but nothing seems to move either Anthony or Sarah. So, after about a month, Felix shows up one day and announces that they are going with him to his country estate, Stag’s Court.

The time at Stag’s Court throws Sarah and Felix into close proximity and both find themselves unable to forget that kiss they’d shared. They end up sharing more and more kisses – and more. Sarah realizes that she’d be happy being married to Felix quite early on, but Felix is adamant that he will not marry. We don’t really find out why until almost the last page and then it is sort of glossed over and we hear nothing of the mental abuse he must have suffered from his uncle. I would have preferred to understand Felix much earlier on in the book.

There is a wonderful epilogue that brings all of the characters from the earlier books together at a ball given by Lady Eugenia Satterfield. We get to see them in all of their happiness and – expecting – states.

I enjoyed the book and I think you will too. While this is the final book of the Untouchables series, be on the lookout for a new spinoff series, Untouchables: Spitfire Society, coming soon. 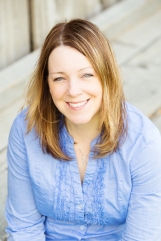 Darcy Burke is the USA Today Bestselling Author of sexy, emotional historical and contemporary romance. Darcy wrote her first book at age 11, a happily ever after about a swan addicted to magic and the female swan who loved him, with exceedingly poor illustrations. Join her reader club at http://www.darcyburke.com/readerclub. A native Oregonian, Darcy lives on the edge of wine country with her guitar-strumming husband, their two hilarious kids who seem to have inherited the writing gene, two Bengal cats and a third cat named after a fruit.