Secrets of a Highland Warrior
The key to his past…

…lies with the enemy sharing his bed!

Part of The Lochmore Legacy: a Scottish castle through the ages! Rory Lochmore had expected to wage battle, to claim land and finally secure his standing within his clan… Instead he won a wife. A McCrieff wife. Their convenient marriage could unite the two long-feuding clans forever. But can a political alliance give way to a passion strong enough to stand the secrets of the past? 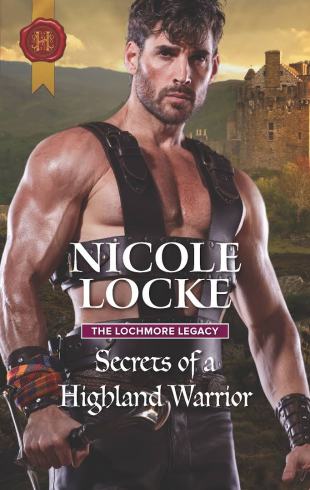 Nicole is the author of Harlequin’s #LoversandLegends series and co-author of the #LochmoreLegacy series. Currently, she lives in Seattle and can be reached via Instagram, Facebook or Twitter. If you don’t hear from her, she’s eating Haribos and drinking copious amounts of tea while frantically trying to find a happily ever after.
Connect with Nicole: Instagram ~ Facebook ~ Twitter

Secrets of a Highland Warrior by Nicole Locke

Ailsa McCrieff is not only the daughter of the clan’s Tanist, but she is also their healer and currently her primary patient it Hamish McCrieff, the chief of the clan who is dying. She is shocked by her father’s offer to marry her to Rory, but for the sake of peace, she is willing, but when Paiden, one of Rory’s men is poisoned and it appears that treachery is at hand, Rory marries Ailsa, but refuses to make it a true marriage until Paiden is healed and he learns who is responsible. The investigation into finding the would-be assassin brings to light many secrets, secrets that Rory may have suspected, but never knew for sure until marrying Ailsa.

This was an interesting story, I found it a little wordy, somewhat hard to follow and honestly didn’t really “get it” – but I have not read the previous books in the series and I don’t know if that makes a big difference. I thought it was interesting and I liked Rory and Ailsa and was happy that they found true love amid all the hate and deception going on around them. I didn’t really understand the significance of the epilogue, but I attribute that to not having read the entire series.

*I am voluntarily leaving a review for an e-ARC that was provided to me by the Publisher.*

Giveaway to Win 5 x copies of Secrets of a Highland Warrior (Open INT)
*Terms and Conditions –Worldwide entries welcome. Please enter using the Rafflecopter box below. The winner will be selected at random via Rafflecopter from all valid entries and will be notified by Twitter and/or email. If no response is received within 7 days then Rachel’s Random Resources reserves the right to select an alternative winner. Open to all entrants aged 18 or over. Any personal data given as part of the competition entry is used for this purpose only and will not be shared with third parties, with the exception of the winners’ information. This will passed to the giveaway organiser and used only for fulfilment of the prize, after which time Rachel’s Random Resources will delete the data. I am not responsible for despatch or delivery of the prize.