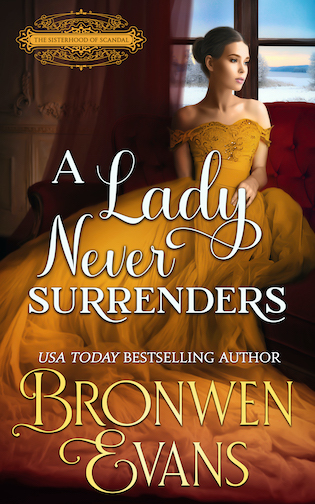 From USA Today Bestselling Author, Bronwen Evans comes her new Sisterhood of Scandal series. A group of ladies whose friendship is based on ensuring they can take on the world dominated by their men folk. No male relative is going to choose their destinies.

Shhh. Blue Stocking Miss Tiffany Deveraux has a secret. The poor orphan is not so poor. But she does not want that information to become common knowledge. Being a plain Jane, any hint of money would just bring fortune hunters to her door. No. In society’s eyes she will remain the poor orphaned ward of the Earl of Marlowe. Only then will she ensure the man who eventually professes his love for her is genuine.

Lord Slade Ware, the Marquess of Wolfarth also has a secret. He’s a renowned investment guru with everything he touches turning to gold. Or is he? Society may think so, but mostly his investments have been blind luck, and he’s pretty sure his luck is about to run out. Help comes in the form of his best friend’s ward. He’s learned Miss Tiffany Deveraux’s secret. She’s an investment guru who has accumulated a considerable sum. Marriage would seem a sensible option with so many dependents relying on him. But what’s a man to do when the one thing a woman wants isn’t his looks, title or money—it’s his heart and Wolfarth’s heart is shattered beyond repair.

It was about time the men in their lives realized that the Sisterhood was a force to be reckoned with. Some ladies wanted more in life than to flutter their fans and bat their eyelashes to attract a man.

She already had a wager with Wolf. Could she out-earn him on one investment in a month? She’d wager her life on the fact that she could make more money in twelve months than he could. But could she make more than all of them combined? Even the brilliant Fane?

“They will be hard to beat. But even if we lose, won’t they be impressed at what we did achieve and that we fooled them?”

One by one the eight Sisterhood members agreed to the plan.

“I’m doing the investing,” Tiffany said, “so you ladies can think up the pranks. Remember, this is not only about the pranks. You have to learn what is going on in your brothers’ investments as well as anyone else’s. Most men don’t remember to hold their tongues around women. We are brainless idiots who cannot possibly understand what they are talking about.”

Before anyone could answer, a loud masculine voice came from the entrance hall. Tiffany looked across at Claire, who frowned and began to rise just as the door flew open.

A man stepped into the room, and Tiffany’s heart did that annoying little flip it always did whenever she clapped eyes on Wolf.

His deep burgundy jacket fitted him like a new glove and showed off his broad shoulders to perfection. He was dressed for riding and his Hessians somehow emphasized his powerful thighs.

“I see Lady Claire has rallied her troops once more. What on earth are you ladies discussing with such vigor? The latest French fashions perhaps?” His gaze swept across the group.. “A few new dresses might not go amiss.”

As usual in Wolf’s presence, Tiffany’s tongue would not function and she could not think of a scathing retort.

Valora did it for her. “We were discussing what we would wear to Mrs. Buchanan’s soiree. Perhaps a different wardrobe would make us blend in better.”

For one fleeting moment, the big bad wolf’s face showed fear. “Very funny, Lady Valora. Vale has forbidden you from attending. I’m sure once I reveal this ridiculous plan to Marlowe, he’ll do the same to you two,” he said, pointing at Tiffany and Claire.

“Then run along and tattle to Marlowe. Don’t let the door hit your conceited arse on the way out,” his sister Ashleigh said.

His face looked like thunder. “You and Ivy are forbidden to attend.” When they simply looked at him with angelic faces, Wolf added, “I’m warning you.”

At that ridiculous edict, the eight women burst into giggles, and Wolf turned his angry gaze on Tiffany. “I’m sure Miss Tiffany won’t want to attend. She has more sense. In fact, I’ve come to request her company for a carriage ride tomorrow afternoon.”

The giggling stopped and all eyes swung her way. Tiffany’s blood boiled in her veins. The cheek of the man. She’d said a slow courtship. This wasn’t slow. How to answer?

“If the weather is fine, the outing would be acceptable. I’ll bring Milly, our lady’s maid.”

“Perfect. If you’ll excuse me, ladies, I shall find Marlowe and leave you to your, er…leave you.” 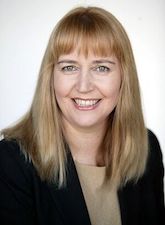 USA Today bestselling author, Bronwen Evans grew up loving books. She writes both historical and contemporary sexy romances for the modern woman who likes intelligent, spirited heroines, and compassionate alpha heroes. Evans is a three-time winner of the RomCon Readers’ Crown and has been nominated for an RT Reviewers’ Choice Award. She lives in Hawkes Bay, New Zealand with her dogs Brandy and Duke.

and get a FREE book by signing up to her newsletter

You can keep up with Bronwen’s news by visiting her website http://www.bronwenevans.com

Series: The Sisterhood of Scandal, #1

Years ago, Miss Tiffany Deveraux lost everything when her parents were killed by highwaymen. She went to live with her Uncle, the Earl of Marlowe and it was then that she met Slade Ware, the Marquess of Wolfarth, Wolf to his friends. She fell a little in love that night, but to her dismay, her young heart was broken when she learned that Wolf was not only engaged but madly in love with his fiancee.

Fast forward six years, not wanting to marry for anything less than love, Tiffany uses the skills she learned from her father and begins to invest her pin money with the same man her father used. She is incredibly successful and soon her friends in the “Sisterhood of Scandal” learn of her ability and ask for her help. She gladly invests for them, happy to prove that women are just as capable as men in that arena. Her investments are doing so well that soon she will be financially secure and no longer dependant on her cousin for funds. Impressed with her success and tired of being treated like helpless children by their brothers/guardians, her friends decide to teach them a lesson and secretly challenge the men to an investment wager. She is confident they will win, but when her stockjobber doesn’t send her statements, she goes to see him and ends up being found out by Wolf.

Not long after Tiffany came to live with her cousins, Wolf’s world fell apart too, when he and his fiancee, Lady Margo are attacked by highwaymen and Margo dies not long after. Leaving Wolf with a broken heart and no desire to ever love again. But marriage is necessary and when he finds out Tiffany is very good at investing (something he struggles with), he decides that marriage to her is the answer to both of their problems, she will be able to continue investing and he will benefit from her knowledge and be able to concentrate on his true passion – painting. But Tiffany isn’t going to give up on her dreams of independence or love that easily and instead agrees to a wager – if she wins, he will keep her investing a secret and if he wins, she will let him court her. It is a bet she can’t lose – that is until the past rears up and crushes her dreams and threatens her chance for a HEA.

This installment of the Sisterhood of Scandal was a non-stop adventure from beginning to end! Wolf and Tiffany are perfect for each other, but will both have to learn to trust and maybe even compromise a bit to they get their HEA. The book is filled with secrets, scandals, great secondary characters, a few warmish love scenes, a little heartache, uncertainty, surprising revelations, wagers, a bit of a battle of the sexes, a nasty villain, abduction and finally a HEA complete with an epilogue that includes of glimpse of the next “Sister” to find her HEA. This is the first full book (there is a prologue short story that is available on the author’s website) in the series, and while it was not as steamy as I had hoped, I can still wholeheartedly recommend this title, it is a fun read that is not to be missed!