In this stunning series starter by USA Today bestselling author May McGoldrick, meet the new generation of Pennington’s…five brothers and sisters of passion and privilege. Enter their aristocratic world…where each will fight injustice and find love.
Hugh Pennington—Viscount Greysteil, Lord Justice of the Scottish Courts, hero of the Napoleonic wars—is a grieving widower with a death wish. When he receives an expected crate from the continent, he is shocked to find a nearly dead woman inside. Her identity is unknown, and the handful of American coins and the precious diamond sown into her dress only deepen the mystery.

Grace Ware is an enemy to the English crown. Her father, an Irish military commander of Napoleon’s defeated army. Her mother, an exiled Scottish Jacobite. When Grace took shelter in a warehouse, running from her father’s murderers through the harbor alleyways of Antwerp, she never anticipated bad luck to deposit her at the home of an aristocrat in the Scottish Borders. Baronsford is the last place she could expect to find safety, and Grace feigns a loss of memory to buy herself time while she recovers.

Hugh is taken by her beauty, passion, and courage to challenge his beliefs and open his mind. Grace finds in him a wounded man of honor, proud but compassionate. When their duel of wits quickly turns to passion and romance, Grace’s fears begin to dissolve…until danger follows her to the very doors of Baronsford. For, unknown to either of them, Grace has in her possession a secret that will wreak havoc within the British government. Friend and foe are indistinguishable as lethal forces converge to tear the two lovers apart or destroy them both.

Authors Nikoo and Jim McGoldrick (writing as May McGoldrick) weave emotionally satisfying tales of love and danger. Publishing under the names of May McGoldrick and Jan Coffey, these authors have written more than thirty novels and works of nonfiction for Penguin Random House, Mira, HarperCollins, Entangled, and Heinemann. Nikoo, an engineer, also conducts frequent workshops on writing and publishing and serves as a Resident Author. Jim holds a Ph.D. in Medieval and Renaissance literature and teaches English in northwestern Connecticut. They are the authors of Much Ado About Highlanders, Taming the Highlander, and Tempest in the Highlands with SMP Swerve.

Excerpt: Romancing the Scot by May McGoldrick 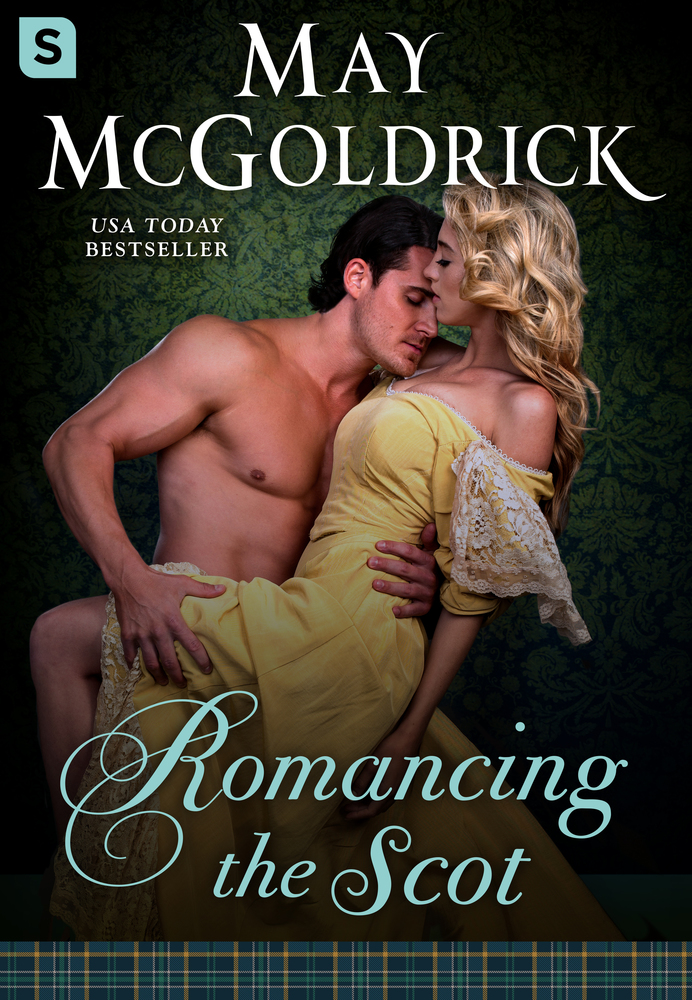 Looking the shipping crate over for damage and seeing none, he retrieved an iron crow from a workbench. Jo was standing inside the doors, eyeing the box doubtfully from a safe distance.
“Come closer. It won’t bite.”
“Not a chance. From the smell of that thing, a person would think you’re importing cadavers. Have you also taken up being a Resurrectionist as a hobby?”
He patted the crate affectionately. “This sweet thing has been sitting in the bowels of a ship from Antwerp. You know what the hold of a ship smells like?”
“Actually, I don’t.” She held a handkerchief to her nose and drew closer. “But I think you’re correct with the reference to ‘bowels.’”
Hugh took the first nail out. “Well, stand back, since you’ve become so prissy. Though I recall a younger version of you leading the rest of us through bogs and marshes that smelled no better.”
“Of course! But as I recall, we had frogs and turtles and the occasional dragon that needed hunting,” she replied with a smile. “Very well. Open it and let’s see this treasure of yours.”
Prying off the top took him only a moment. Throwing it to the side, he pulled back the tarp that covered the basket and then stared curiously at the dark green rags bundled at the bottom.
Leaning in, Hugh’s enthusiasm evaporated as a horrid realization settled in. This was no pile of old clothing. A shock of blond hair. A shoe. A hand. The body of a dead woman lay curled up in the gondola.
“Bloody hell.”
“What is it?” Immediately, Jo was at his side. “Good God!”
Hugh climbed in and crouched beside the body. He took her hand. She was cold to the touch. His heart sank. The crate had been shipped from Antwerp. To be trapped for so many days with no water, no food, in the cold and damp of the ship’s hold. He had no idea who this woman was or how she came to be in here.
The thought struck him. Perhaps it wasn’t an inadvertent act. Perhaps she was murdered and her body had been dumped into the crate.
Dismay and alarm clawed at him as he pushed away the matted ringlets of golden hair. She was young. He lifted her chin. The body had none of the stiffness of postmortem. He stared at her lips. He may have imagined it but they seemed to have moved.
“Bright . . .” The whisper was a mere rustle of leaves in a breeze.
The fingers jerked and came to life, clutching at his hand.
“She’s not dead,” he called to Jo, relieved. “Send for the doctor. I’ll take her to the house.”
His sister ran out, calling for help, and he lifted the woman. She emitted a low groan. Her limbs had been locked in the same cramped position for so many days. Hugh propped her over the side of the gondola.
“Stay with me,” he encouraged. “Talk to me.”
Holding the woman in place, he clambered from the basket and then gently lifted her out, cradling her in his arms. She weighed next to nothing.
As they went out into the rain, he feared she was about to die. The exertion of trying to breathe showed on her face. He’d seen this on the battlefield. The final effort before death.
Starting up the path, he stumbled, not realizing the woman’s skirts were dragging on the ground. He staggered but caught himself before they went down. Her head lolled against his chest, her face gray and mask-like. She appeared to be slipping away. It would be a shame that she’d survived the crossing only to perish now.
A dagger point of anger pierced Hugh’s brain as he recalled another dismal day when he’d lifted two other bodies, wrapped in burial shrouds, from a wooden box.
“Talk to me,” he ordered. “Say something.”
As he made his way up the hill toward the house, a bolt of lightning streaked across the sky above Baronsford. Thunder shook the ground and the sky opened, unleashing fierce torrents of rain on them.
His wife. His son. Hugh hadn’t been there for them. They’d died as he and the British army were being chased by the French across Spain. He’d been trying to save his men’s lives, not knowing that those most precious to him were suffering.
“You’ve survived a horrifying ordeal. Give me the chance to save you.”
The woman struggled weakly in Hugh’s arms, and her head tipped back. He watched as her lips parted, welcoming the wetness of the falling rain.
“We’re almost there.”
“Bright . . .” she murmured.
He looked into her face and saw she was trying hard to open her eyes.
“Yes, brighter than that crate,” he said, encouraged by her effort. Any movement, however small, gave him hope. “And you’ve been in there for Lord knows how long.”

Romancing the Scot by May McGoldrick

I loved this story, Hugh and Grace are wonderful characters that having you rooting for their HEA.

When Grace Ware finds her father and their servants dead and the villains still in the room, she runs. She hides in a shipping crate and ends up being sealed in.

When Hugh Pennington, Viscount Greysteil, Lord Justice of the Commissary Court, opens the crate housing his balloon gondola, the last thing he expects to find is an almost dead woman and a handful of American coins.

Grace wakes with a fever and doesn’t know where she is, in her delirium and tries to find her father. What she finds is Hugh in the library. In her fevered state, she doesn’t answer his questions, but does tell him her name is Grace. Since he found her, there have been more questions than answers, including who is she and why did she have an uncut diamond sewn into the lining of her gown?

Grace finally wakes and is horrified to learn that Hugh is the Lord Justice and she is in Scotland. Her Irish father was a commander for Napoleon and her mother’s family were Jacobites. Afraid to reveal her identity in fear of being imprisoned as a traitor, Grace feigns amnesia. But the ruse is hard to maintain, Grace has the gift of a photographic memory, she can remember every word she has ever read and pretending to have no memory is hard for her. She wants to trust Hugh and his sister Jo, but fear keeps her quiet. In addition, she has no idea how the diamond ended up in her possession and wonders if she has unintentionally become a conspirator with her father.

Hugh is intrigued by Grace and feels alive for the first time in years. His family believes he has a death wish and that he is overcome with grief after losing his young wife and son eight years ago. But what they don’t know is that guilt more than grief has kept him prisoner for all these years. Grace is the first woman he has ever met that stirs his soul.

Hugh does his best to protect Grace and as they get to know each other, something sparks between them. But Grace is still keeping secrets and Hugh has too much honor to start a relationship with a woman who might be spoken for. They continue to grow close, Grace challenges Hugh and he begins to change. When a nosy neighbor comes calling with her houseguest in tow, Jo tries to hide Grace by sending her off with Hugh, but the neighbor catches them on the road and Grace knows her time is running out, because the houseguest knows her true identity. Later Grace learns of Hugh’s wife and child, she is heartbroken and finally confesses who she is.

Hugh struggles with this knowledge, he also finally faces his past and knows without a doubt that Grace is the woman he wants in his life, no matter her past or her family. When the houseguest tries to lure Grace into a trap – Hugh knows that he loves her and will never let her go.

But there are forces at work that could ruin any future between them and secrets that must be discovered and set to right before they can even consider a HEA.

I am happy to recommend this book and look forward to reading Jo’s story. FYI – The story of Hugh’s brother is already available in the anthology Christmas in Kilts!