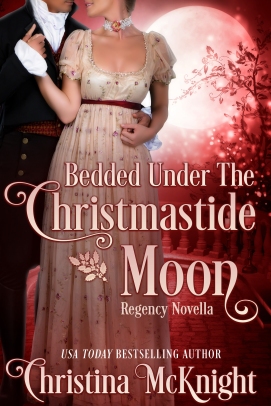 Follow the tour and enter to #win a $10 Amazon Gift Card
Enter at: http://www.rafflecopter.com/rafl/display/b050ef29557/?Rafflecopter embed code:
a Rafflecopter giveaway

For years, Lady Melloria Whitmore has believed her childhood best friend and secret love Brigham Clarke agreed to marry her out of a sense of duty. Knowing how important Brigham’s work with Parliament is to him, she agrees to see him once a year, when he returns to his country estate for the holidays. This Christmas, Mellie vows to give Brigham the one thing he has always wanted: an heir. For one night, she’ll share his bed, and she’ll have that memory of passion to get her through the long winter nights without him.

IS ABOUT TO BECOME A MARRIAGE OF LOVE.

Except Brigham doesn’t want just one night—he wants forever. He’s loved Mellie all his life and making her his Viscountess Whitmore was his dream. He just never thought Mellie returned his feelings. So when Mellie begins her seduction under the Christmastide moon, Brigham receives the best gift of all: his wife’s love.

This is a short novella – around one-hundred pages.

Viscount Whitmore, Brigham Clarke grew up next door to Miss Meloria Steele, the daughter of the Baron and Baroness Montford. He had loved her all of her life and now he was marrying her. Mellie also loved Brigham. Sounds like they already have their Happily Ever After doesn’t it. Well, that isn’t the case. You see – neither of them has told the other that they love them and each feels as if they are using the other for selfish purposes. He feels that he used the death of her father and the fact that she and her mother were left impoverished to get her to marry him. She feels that he only married her so that he could save her by providing her with a home and care for her ill mother. They were married on the same day that they buried her father. He left for London that same afternoon without consummating the marriage.

For five years Brigham lived in London and Mellie lived at Hockecliffe Manor. The marriage remained unconsummated and Brigham only visited Mellie once per year at Christmastide and he only stayed for a day or two. In all that time, they still loved each other, but they never told each other. You’ll find that most of this book is taken up with self-introspection and each of them repeating all the reasons why the other doesn’t and shouldn’t love them.

Brigham has spent five years as a reformer in Parliament. He’s constantly meeting people and working for their votes. However, his bill for the reform of the coal industry has just gone down in defeat – another way he’s let Mellie down – and it is time for his Christmastide visit. He wonders how this visit will go since Mellie’s mother passed away just five months ago and he didn’t even get home for the funeral.

For this Christmastide, each of them has come to the determination that it is time for things to change. She has decided to seduce him and provide him with an heir and he has decided he wants to be through with London and come home to live with Mellie. Can she – will she – want that?

They don’t get off to a very good start – can they turn it around and get their HEA?

Her books combine romance and mystery, exploring themes of redemption and forgiveness. When not writing she enjoys coffee, wine, traveling the world, and watching television.