Celebrate the release of THE HIGHLANDER’S HELLION, the latest in the Sutherland Legacy series by USA Today Bestselling Author Eliza Knight!

What Readers are Saying:

“Just when you think you found you favorite book, Eliza brings out another in The Sutherland Legacy, and WoW!… It has Grim MacCulloch, who is so divine you could eat him, and Greer Sutherland, who’s got so much sassy it’s addictive.”—Goodreads Reviewer

“Eliza Knight is such an incredibly talented author who has written so many good books. Every time I read another book from her I’m shocked because she always manages to make it better than the last. I really enjoyed the chemistry between Greer and Roderick.”—Goodreads Reviewer

Add THE HIGHLANDER’S HELLION to your TBR pile on Goodreads!

Lady Greer was a hellion from the moment she could walk. So, when the young woman is forbidden by her father, the Earl of Sutherland, to sail, she steals a boat and rows it out into the firth anyway. But her relaxing jaunt turns into so much more when a storm ravages the chill waters and the prospect of death is soon upon her.

The last thing Roderick MacCulloch, Laird of Gleann Mórinnse Castle, expects to find while out scouting his property is a soaked lass upon his shores. When she demands he take her back to her clan, he recognizes her as the mischievous lass who taunted him at a festival when they were children. Roderick realizes this might be his chance to have a bit of fun and give Lady Greer a taste of her own medicine

But Roderick’s chance at revenge turns into a merry chase across the Highlands that leads them both to unexpected passion, perilous danger…and maybe even love. 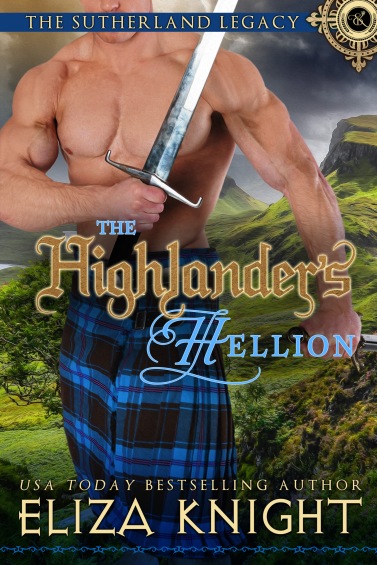 An excerpt from THE HIGHLANDER’S HELLION:

Copyright © Eliza Knight 2018
Warmth surrounded Greer, cocooning her in a decadent cloud. She snuggled closer to the heat, smiling in her sleep.
Something niggled at the back of her brain, as though she were trying to remember something important. What was it?
And then she bolted upright in bed, recalling exactly what she was supposed to remember. She’d nearly drowned.
She jerked around to face the wide-eyed gaze of a man—a very handsome man—but still a man!
“I’m naked,” she gasped, pressing her hands to her breasts to hide them from where the blanket had fallen.
“Aye.” The voice was gruff, filled with sleep and grumpiness.
She felt him slip from the bed, unable to make eye contact with him. Oh dear heavens…
The chamber was completely unfamiliar to her. Not one at her own castle. Not one at any castle she’d ever been to. The wood floor was bare of rushes.
Weapons lined the wall, and there was a single wardrobe beside the chamber door. To the left of the hearth were a small table and two large chairs. Chairs fit for a giant. Or from the looks of the man she couldn’t bear to view just yet—chairs fit for him.
The shutters over the window were closed, so she couldn’t get a good look outside to perhaps judge from the landscape where she was. Which meant she had to rely on the stranger whose bed she’d been in. Naked.
She wouldn’t have thought last night, as she floated in the darkened sea, that her situation could get any worse. But it would not be the first time she’d been wrong.
“Where am I? Who are ye?”
“Ye dinna recognize me?” He sounded surprised.
Greer squeezed her eyes shut. Had she drowned and gone to Hell?
“Are ye naked, sir?” she squeaked.
“As the day I was born.” Why did he have to sound so gleeful?
Greer fell back on the bed and pulled the blanket up over her head, feeling her face heat with shame. She could die now. Right now would be fine. Somehow, she’d managed to drown herself and had either become a man’s mistress or married him without her knowledge. Either way, her da was going to murder her, and her mother would be heartbroken.
“Bring me a sword,” she croaked, her voice coming out muffled with the thick pile of blankets on her face.
Even still, he seemed to have heard her. “Are ye going to finish me off then, lass?”
Finish him off? “I canna comprehend what that means right now, but I do plan to finish myself.” 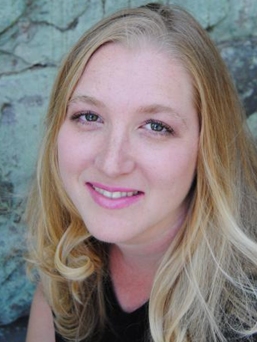 Eliza Knight is an award-winning and USA Today bestselling author of over fifty sizzling historical, time-travel and contemporary romance novels. Under the name E. Knight, she pens rip-your- heart-out historical fiction. While not reading, writing or researching for her latest book, she chases after her three children. In her spare time (if there is such a thing…) she likes daydreaming, wine-tasting, traveling, hiking, staring at the stars, watching movies, shopping and visiting with family and friends. She lives atop a small mountain with her own knight in shining armor, three princesses and two very naughty puppies.

The Highlander’s Hellion by Eliza Knight
Tracy’s rating: 3.5/4 of 5 stars

Lady Greer, daughter of Magnus & Arbella, is a hellion and a free spirit that cannot tolerate the thought of being kept from doing what she loves, but that is exactly what happens when her father forbids her to sail. In an act of defiance, she takes her boat out alone and gets caught in a storm.

Roderick McCulloch aka Grim has known more than his share of loss, his mother who died giving birth, his father who was killed in an ambush and his beloved sister Jessica who was a troubled soul who took her own life. Roderick has decided that he is better off without love and the pain it brings, as laird, he has too many people depending on him to lose himself in emotion and the last time he contemplated marriage he was almost crippled for life…

After almost a decade of peace, Ina Ross is starting trouble on the McCulloch lands again – raiding and stealing livestock. Grim needs to restore the stolen property to prove to his clan, he is worthy of the title Laird. After a successful night of retrieving his animals and learning information about Ina, he goes to the beach to think. But he doesn’t find the peace he was seeking, instead he finds Greer, the woman that 2 years ago he considered marrying – until she almost killed him with a spear, on the brink of death. He saves her and takes her to his castle.

The next day he finds her awake and tells her he will take her home – she begs him to take her across land rather than by boat and he agrees. They set out and they each begin to discover how much they have in common and how suited they are. But before they can even think about acting on their feelings they will have to overcome ambushes, a demented villain, angry fathers and misunderstandings.

I thought this was a good addition to the Sutherland Legacy and it was nice to catch up with Magnus and Arbella as well as Greer’s sisters and brothers. Liam obviously has something going on and I personally can’t wait to read his story. The book was well written and the romance was a very slow burn – I found myself getting annoyed with them both and thinking, just kiss already!! But, overall it was a good book with a lot of emotion, a few laughs, action and a very sweet ending.

*I am voluntarily leaving a review of an eARC that was provided to me.*

2 thoughts on “The Highlander’s Hellion by Eliza Knight #BlogTour”